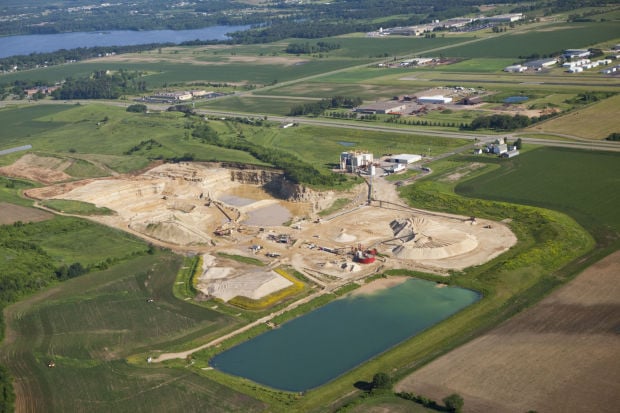 The Fairmount Minerals frack sand mine near Menomonie, Wis., in 2011. 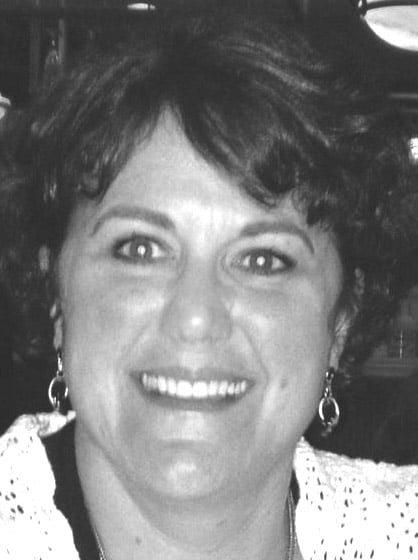 As many as 450 semi trucks will be hauling sand across this interstate bridge through the town of Wabasha, Minn., to a railroad transload in a residential area. The sand is being mined across the Mississippi River in Wisconsin. The town council imposed a moratorium on more frack sand facilities pending further study. 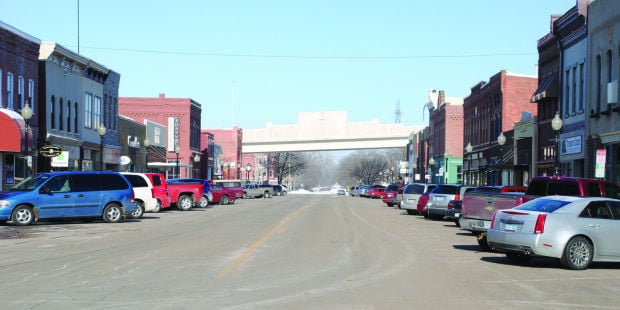 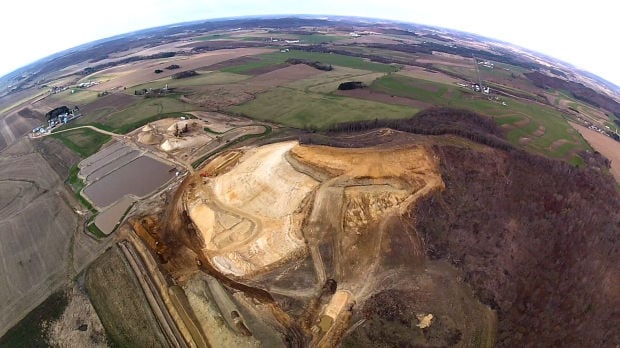 A wide angle aerial view of a frack sand mining operation in Wisconsin.

The Black Hills gold rush could turn into a latter-day sand rush aimed at the Bakken oil fields in North Dakota.

South Dakota is the latest of states that may turn its quartz sand deposits into cash just like it turned its hills into gold a century ago.

Millions of tons of sand are used in the Bakken every year to prop open deep hydraulic fractures to force oil to flow. All of that sand is imported by truck and train into the oil patch, where it’s huge business.

“This is the closest known claim to the Bakken. I think this is an excellent idea for participating in the economic event called the Bakken,” Ganje said.

South Dakota could mine sand out of the Black Hills at the same time Minnesota is talking about a one-year moratorium on new sand mining permits.

Minnesota Sen. Matt Schmit, D-Red Wing, introduced the legislation and said the timing is right for a moratorium because the industry is still small in Minnesota and the demand and price for silica sand are down now.

To meet industry standards, quartz sand has to be a consistent size and strength to prop fractures under thousands of pounds of pressure. The Bakken appetite for it is enormous and consumed about 2 million tons of sand last year, said Lynn Helms, director of the North Dakota Department of Mineral Resources.

Sand has been worth as much as $120 a ton, though the price has recently dropped off by half, likely because fracking slowed dramatically this winter and is expected to remain slow into spring until road weight limits go back to normal.

Helms said sand is the preferred propping agent in the middle Bakken formation, though high-strength ceramic beads are blended and preferred in some wells in the Three Forks formation.

Much of the manufactured ceramic “sand” comes from China, which is a concern because it can be radioactive, Helms said.

Ganje said Cambrian has issued a request for mining proposals and is waiting to hear from interested companies.

South Dakota is latest on the frack sand scene after Wisconsin, which is a primary Bakken source. Wisconsin has more than 60 sand mines and 12 million tons were mined last year. The state’s sand mining industry developed for glass manufacture and expanded in recent years for frack sand.

In between is Minnesota, where sand mining is in its infancy, with 15 sand mines and operations and about a dozen permits pending, according to Schmit.

Schmit said Minnesota needs time to study water and air quality concerns, along with the impact of semi truck hauling before it gets into the industry on the scale Wisconsin has.

“We’ve got the opportunity to take time to get it right. Wisconsin was not prepared,” Schmit said. Even if a moratorium doesn’t survive the Minnesota Legislature, he’s hoping for an overall environmental assessment and a means to create guidance for state and local sand mining permits.

Schmit said the state’s quartz sands are in the woodsy river country of southeastern Minnesota, a pristine area famous for trout fishing and eagle habitat.

“It’s too soon to say how big this (industry) is going to be,” Turri said.

She said the state needs to know more about the effects of inhaling sand particles, which can cause silicosis, and the potential for discharge of sandy water into rivers.

Lynn Schoen is a member of the Wabasha, Minn., city council, which she said reluctantly and under threat of being sued approved zoning for a frack sand transload at the railroad in town.

The picturesque Mississippi River town of 2,500 could see as many as 450 semi trucks going and coming past city parks and through neighborhoods to the transload site. Those trucks will be driven through the heart of the community by workers for a Canadian company that’s mining frack sand on the Wisconsin side of the Mississippi River.

Schoen said the council was able to prevent hauling through town on weekends when Wabasha is busy with tourism and special activities.

The council did approve a moratorium on any more sand mining operations.

“Over in Wisconsin, they are getting beat up. We need to learn more before it takes us over,” Schoen said.

She said Minnesotans support the iron ore mining industry up north, but sand mining is different because it disrupts the geologic sand layers that hold aquifer water.

“Nobody can answer how much sand we can lose and still have our quality of water,” she said.

In South Dakota, Ganje said, Cambrian’s sand enterprise will require a mix of permits and licenses, though mining is a time-honored industry there.

“This (sand) mining is less intrusive than hard rock mining by a long shot,” Ganje said. “Mining rules allow hearings and protests and all kinds of public devices.”

He said he expects the sand would be trucked out of the Black Hills to the Bakken and into the gas plays in Wyoming and Montana.

The Fairmount Minerals frack sand mine near Menomonie, Wis., in 2011.

As many as 450 semi trucks will be hauling sand across this interstate bridge through the town of Wabasha, Minn., to a railroad transload in a residential area. The sand is being mined across the Mississippi River in Wisconsin. The town council imposed a moratorium on more frack sand facilities pending further study.

A wide angle aerial view of a frack sand mining operation in Wisconsin.