As pump jacks pull more and more oil out of shale rock buried deep below the western part of the state, an increasing amount of natural gas travels up through the wells with few obvious destinations in North Dakota.

Oil producers burn off some of the gas at well sites because the state has maxed out its processing plants and pipelines that carry the rest of it to market, often out of state. While the bulk of North Dakota gas is methane, it’s also rich in hydrocarbons like ethane, propane and butane, which are known as “natural gas liquids” because they can take on a liquid form under certain pressures and temperatures.

“If you look at the other shale plays, the Bakken is at the top of the pack,” North Dakota Pipeline Authority Director Justin Kringstad told the state’s Industrial Commission last week.

The Bakken might be richer in natural gas liquids than gas produced in places such as the mid-Atlantic and the Gulf Coast, but North Dakota lacks something that those areas do have: a petrochemical industry that uses substances such as ethane to make products like plastics or fertilizers.

The potential to do the same in North Dakota has a lot of people involved in energy here talking.

“What you hear from the companies when you start poking around is there’s somewhere between five and 10 companies that are actively looking for projects over the next five to 10 years worldwide,” Lt. Gov. Brent Sanford said.

North Dakota faces competition from places like Texas, where a company could leverage an old, defunct industrial site and tap into existing infrastructure, he said. Then there’s the Utica and Marcellus shale plays in Pennsylvania, Ohio and West Virginia that produce vast quantities of natural gas.

Shell, for example, is building a massive facility known as an ethane cracker near Pittsburgh. It would heat up ethane to break down its molecular bonds. That process forms ethylene, which is a building block of plastic.

Alberta, Canada, is home to the petrochemical industry as well, and state officials have not only made trips there this year but are in talks with “a few” companies about setting up shop in North Dakota, Sanford said. He declined to name the companies, citing nondisclosure agreements.

The state is taking even more steps to court the industry. Earlier this year, the North Dakota Department of Commerce invested $200,000 in a new private company, Bakken Midstream, which is working to develop petrochemical infrastructure.

Incentives for the industry are not unique to North Dakota. Pennsylvania, for one, authorized up to $1.65 billion in tax credits over a 25-year period for Shell to build the ethane cracker near Pittsburgh.

Sanford said North Dakota might study other states’ incentive packages as it tries to lure the industry here.

Despite the building momentum, he doesn’t expect petrochemical facilities to come overnight.

“We have a lot of constraints, the main one being that there isn’t any pet-chem industry here now,” Sanford said.

But he envisions a “building block process” that would involve adding infrastructure in incremental steps over time. An ethane-fired power plant could be one of the first steps. Other facilities may include sites that separate out the various types of natural gas liquids, ethane crackers or other manufacturing plants.

“It’s a great opportunity,” Sanford said. “It’s incredible how much economic gain and job growth could come from this.”

State officials want clarity on the chemical makeup of the state’s natural gas liquids to offer assurance to the petrochemical industry that North Dakota would be a sound place to invest.

Right now, about 300,000 barrels of ethane are pumped out of the ground each day in the state, said Kringstad, with the Pipeline Authority. He projects that number will grow in the years ahead as oil production climbs.

Some of North Dakota’s ethane is loaded onto the Vantage Pipeline and transported to Canada after it’s separated from the rest of the gas at processing facilities in Tioga and Williston. The bulk of the ethane, however, stays in the natural gas stream and is piped away from the Bakken for other uses like home heating or power generation.

Ethane makes up about half the natural gas liquids in Bakken gas, followed by propane and butane. Kringstad said the state has plentiful information showing the breakdown of natural gas liquids at the start of a well’s life, “but that is where the data stops.”

He plans to formally ask the Industrial Commission later this fall to authorize a study from the University of North Dakota’s Energy & Environmental Research Center that would look at how the chemical makeup of natural gas liquids changes over the life of an oil well. He told the commission last week that the study would offer insight into whether the extracted gas becomes richer or experiences a drop in liquids as time progresses.

“Part of the reason for why this study would be super-important is that if we’re going to attract additional gas processing or pet-chem investment in our state, they need to know that there’s a gas resource here that would warrant them making an investment,” he said.

As momentum grows, a pair of engineers from Bismarck have a specific vision for the state.

“Everybody is talking about it, but what does that really mean for North Dakota if we start building a petrochemical facility?” said Don Kopecky, a mechanical engineer with Barr Engineering.

He and environmental engineer Scott Korom see potential to leverage both ethane and the abundant saltwater that comes up at wells alongside oil from deep underground. Both those substances could be used to manufacture a specific type of plastic known as polyvinyl chloride or PVC.

“The most well-known application of that is plastic water pipes that you have in your house,” Kopecky said.

Saltwater is generally considered a waste product in the Bakken, and it’s injected back underground for storage. If it were to be used in plastics manufacturing, it would first need to go through a process known as “chloralkali” that would separate out the chlorine from the fluid.

The chlorine gas would then go into a reactor to be combined with ethylene, which comes from sending ethane through a cracker like the one under construction near Pittsburgh.

The reactor process would produce vinyl chloride, which is the precursor to PVC.

The engineers say the global market for PVC is projected to grow, and they calculate that manufacturing PVC would provide a far greater return on investment than producing polyethylene, which is another type of plastic made from ethylene.

Making PVC, particularly through the chloralkali process, is no small feat.

“A lot of energy is going to be required, and North Dakota is a great producer of electricity,” Korom said.

The engineers calculate the state would need five new 750-megawatt power plants to meet the power demand if all the state’s ethane were to go into the PVC-making process. They acknowledge that PVC production on that scale is unlikely in North Dakota, but their figures illustrate how energy-intensive the process is.

PVC production also would use huge amounts of water and require a lot of trains to carry the product to market. It could potentially result in thousands of jobs, according to their calculations.

Their vision is one of many options for how the industry could evolve in North Dakota. Given the state’s cheap electricity prices, coupled with abundant gas and saltwater resources, Kopecky think it’s one worth pursuing. Plus, it would have ripple effects for the transportation industry and the workforce.

A delegation of state officials toured several petrochemical facilities in Alberta, Canada, on Wednesday as North Dakota looks to build up a s…

North Dakota is courting the petrochemical industry with a new tax incentive aimed at adding value to the state’s abundant natural gas supply. 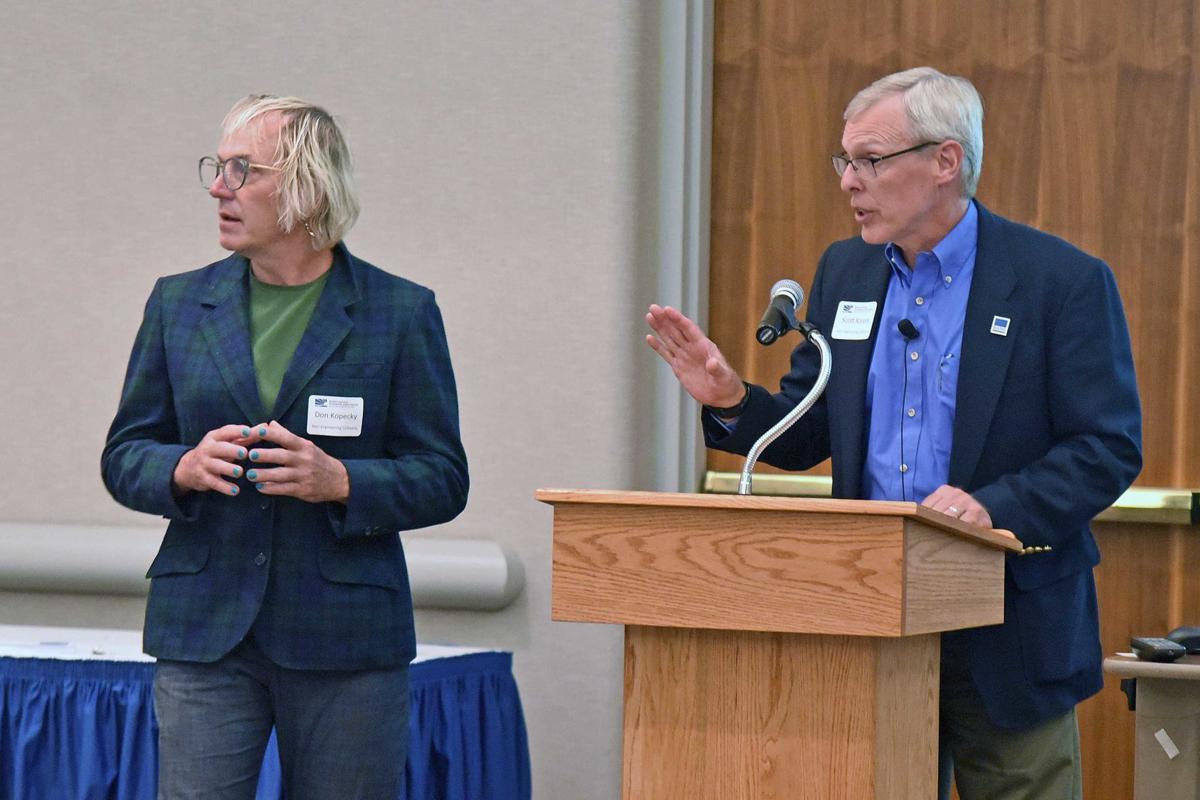 Don Kopecky, left, and Scott Korom, both of Barr Engineering of Bismarck, answer questions after a recent presentation they gave on plastics at the North Dakota Planning Association annual conference. 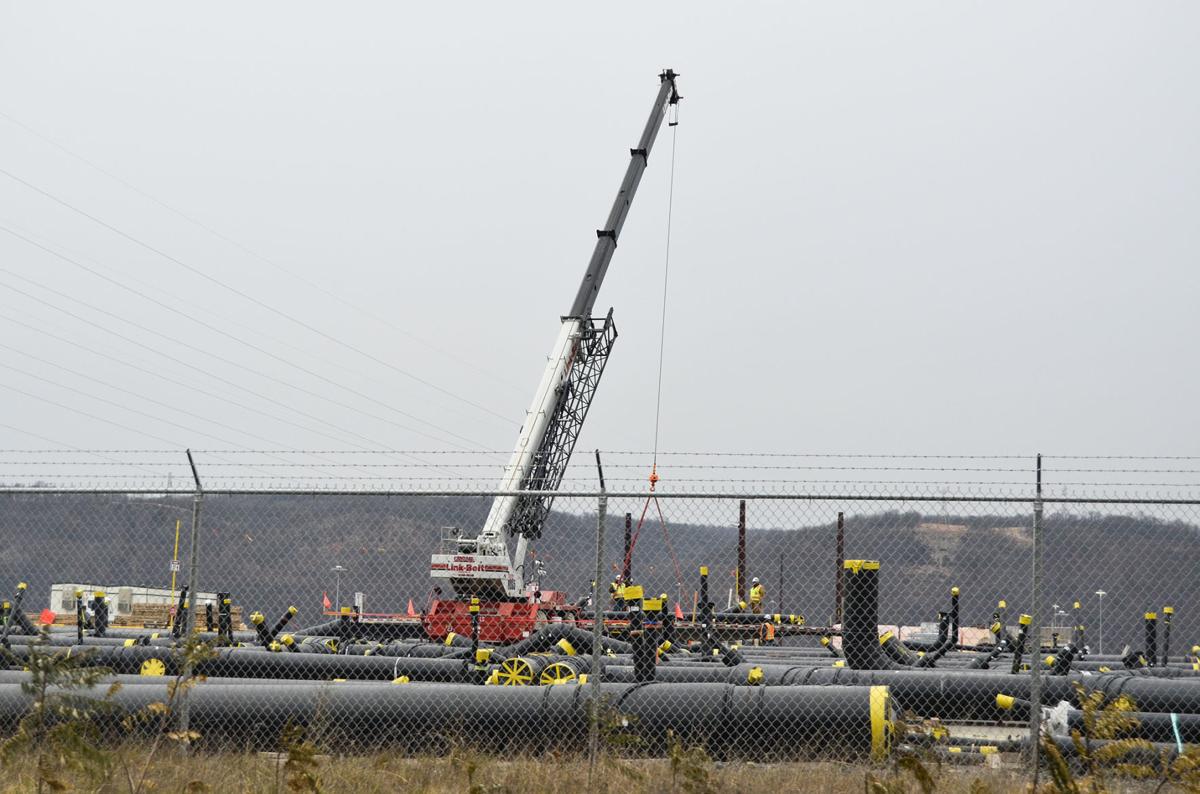 Shell is building a massive ethane cracker near Pittsburgh. The facility will heat up ethane to break down its molecular bonds. That process forms ethylene, which is a building block of plastic. 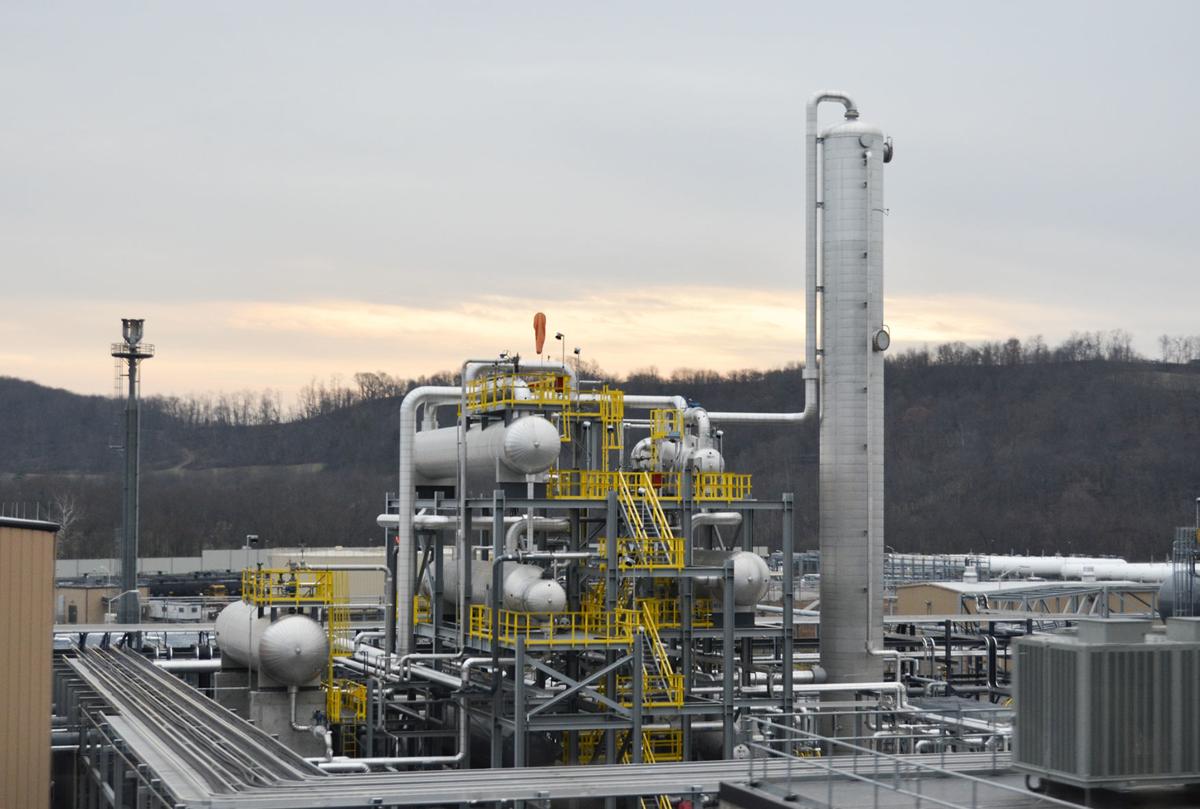 Fractionation facilities like this one in western Pennsylvania separate the various components of natural gas liquids such as ethane, propane, butane and pentane.