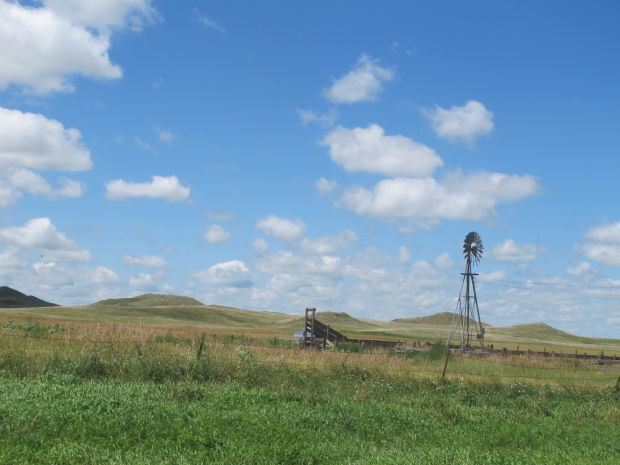 This rocky hilltop country north of Hettinger could change dramatically if a 75-turbine wind farm is built out there. 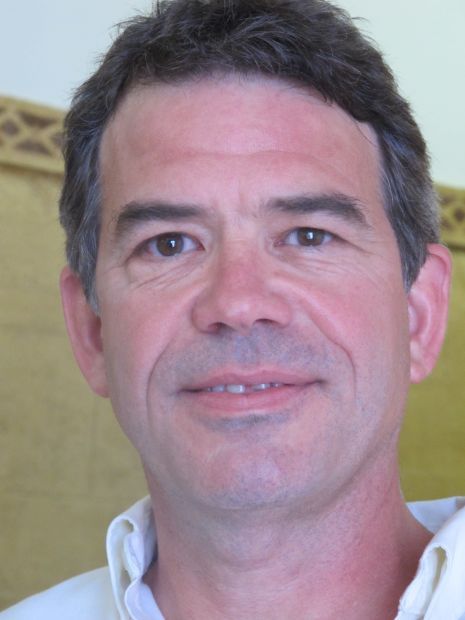 Dan Albano, shown Sept. 9, 2013, is a spokesman for Thunder Spirit Wind, which plans to build a

A controversial application for a mega-wind farm near Hettinger was approved by the county planning and zoning commission Monday night and the county commission followed suit immediately with little fanfare.

Landowner Larry Slater said at the meeting he feels like he struck it rich with six possible towers and leases on his land.

“With those rocky hills, we feel like the Beverly Hillbillies struck oil,” Slater said.

He said as an industry, wind energy doesn’t smell, there’s no smoke and no dust. “Once it’s going, it will be all right. If you get them on your land it’s a good deal,” Slater said.

He said he started with eight turbines, but is down to six because of the county’s siting requirements.

Zoning member Chuck Christman said he believes zoning should project landowners but not dictate how they use their property.

“It’s of the utmost importance that we look at this as a plus, not only for taxation but for being sure we have a community that is viable,” Christman said.

Bill and Ellen Elders of rural Hettinger were two of three to speak against the project. Eleven others spoke in favor.

The Elders both said the project will drastically change life at the country home they’ve enjoyed for 31 years. The project’s towers will be visible 360 degrees around them and they’ll hear constant humming from the turbines and blades and see shadow flicker as the blades whirl against the sun.

Slater said he understands the couple’s feelings, but, “We’d just move to town if they bothered us,” Slater said.

“Other communities around us are seeing progress, but I’m afraid if we don’t do something, I see us fading away,” she said.

Construction would start in the spring — pending a siting permit from the Public Service Commission, which will hear the company’s case Sept. 19 at the Adams County Courthouse.

It was the second hearing for the project and was set aside the first time to give the developer the opportunity to get within the county’s required half-mile setback from an occupied residence. Four towers had to be moved on the map plan.

Bill Elder was the first from the community to the microphone and said he’s opposed because wind turbines are unnecessary, expensive and affect the neighborhood quality of life, based on noise alone.

“The people who will benefit are people who have towers. Eleven of them don’t live in township and we’ll be left with noise and the shadow flicker,” Elder said.

Nancy Secrest said she would not have purchased her rural property if the wind farm had been in place and doesn’t expect her property value will up hold if gets built.

“We’re talking about the lesser of two evils — oil wells or wind towers. We shouldn’t have to have either one,” she said.

An oil company wants to intervene in a dispute over the state's “pore space” law, a move opposed by a landowners group that filed the suit.

A public hearing has been set for a proposed natural gas liquids pipeline slated to connect several processing plants in Williams County.

Officials will receive a valuation of all 2.6 million acres of state-owned minerals to help them manage the property amid oil development.

The developer of the Dakota Access Pipeline has joined a consortium of companies working on pipeline leak detection technology.

A new natural gas plant proposed west of Williston could help reduce flaring in the northern part of the Bakken oil patch.

Oil and gas production held steady in November, according to new state figures.

The largest reported sale of the year for the multifamily market closed on New Year’s Eve and included properties from Williston, Tioga and St…

This rocky hilltop country north of Hettinger could change dramatically if a 75-turbine wind farm is built out there.

Dan Albano, shown Sept. 9, 2013, is a spokesman for Thunder Spirit Wind, which plans to build a