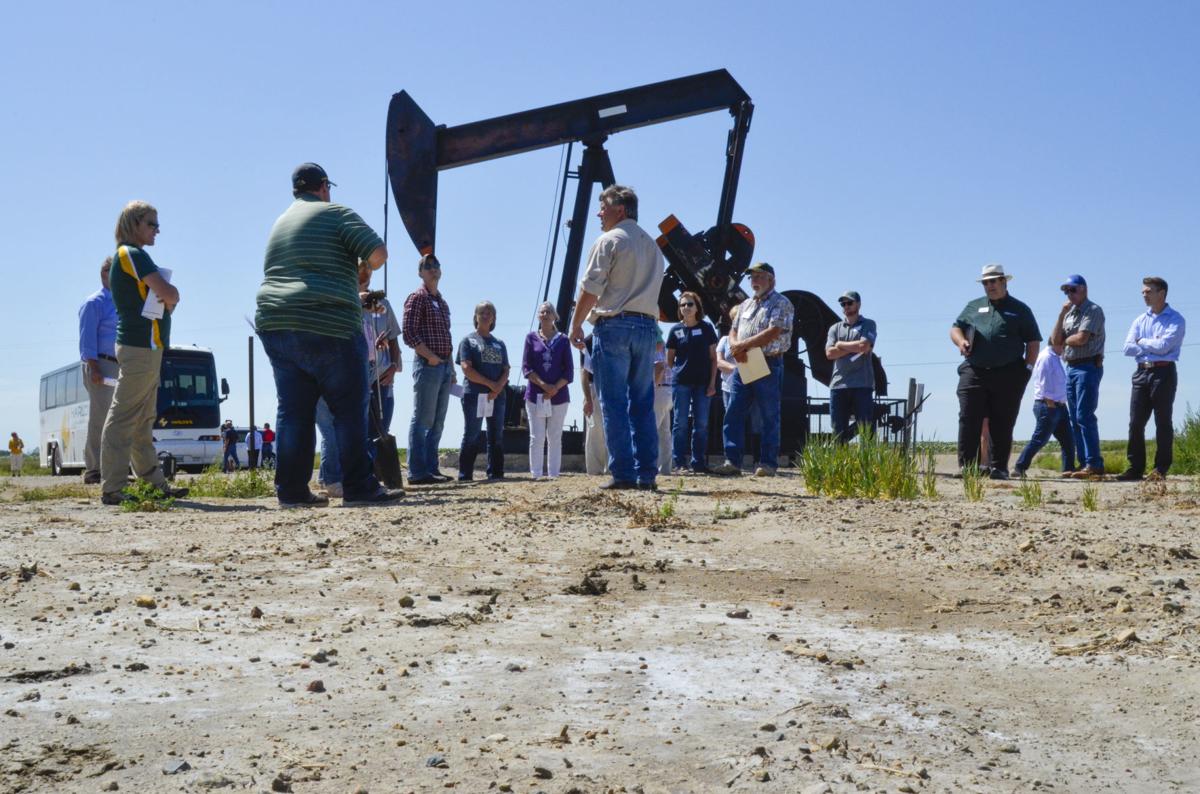 A group of North Dakota State University Extension specialists, landowners, oil workers and state officials gather at the site of an old brine pit near Glenburn in late July. 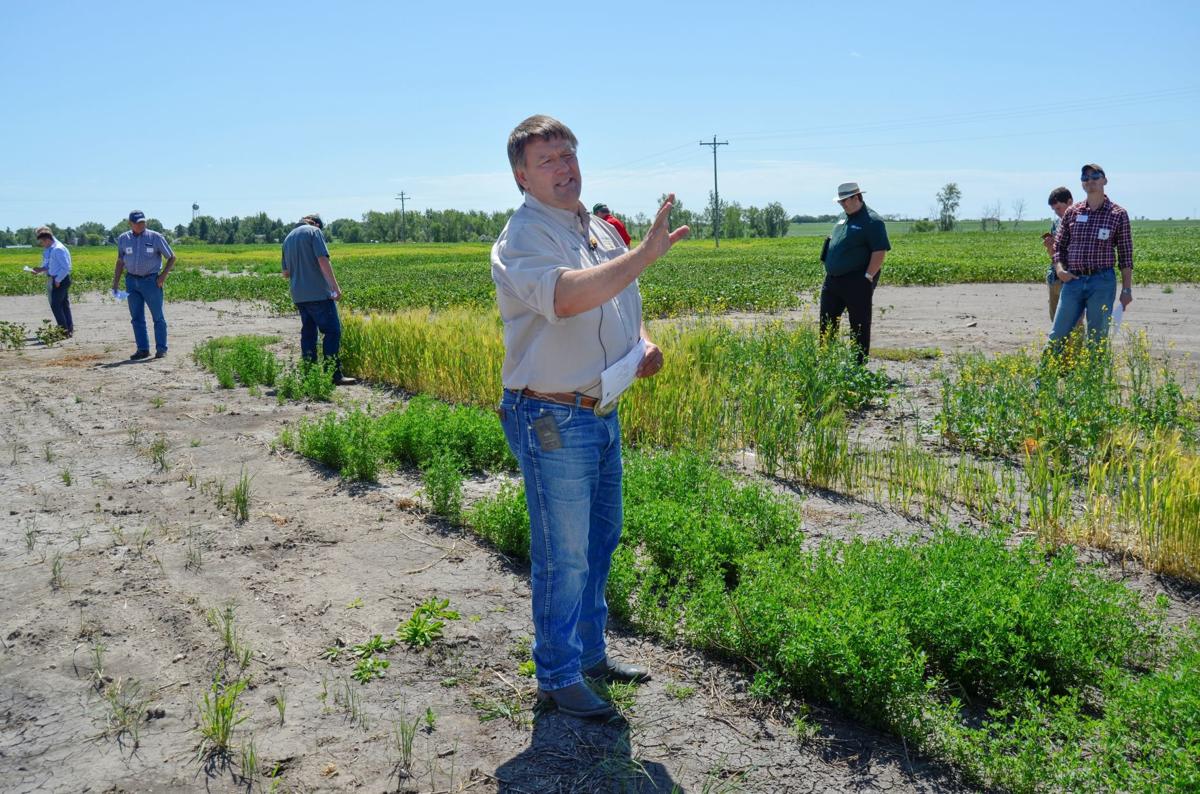 NDSU Extension range and grassland ecologist Kevin Sedivec has treated the salt-heavy soil at a research site near Glenburn with amendments like gypsum, hay and manure to see what materials will help crops grow. He recently led a tour of the land, where oil producers decades ago dumped brine into a pit, contaminating the soil. 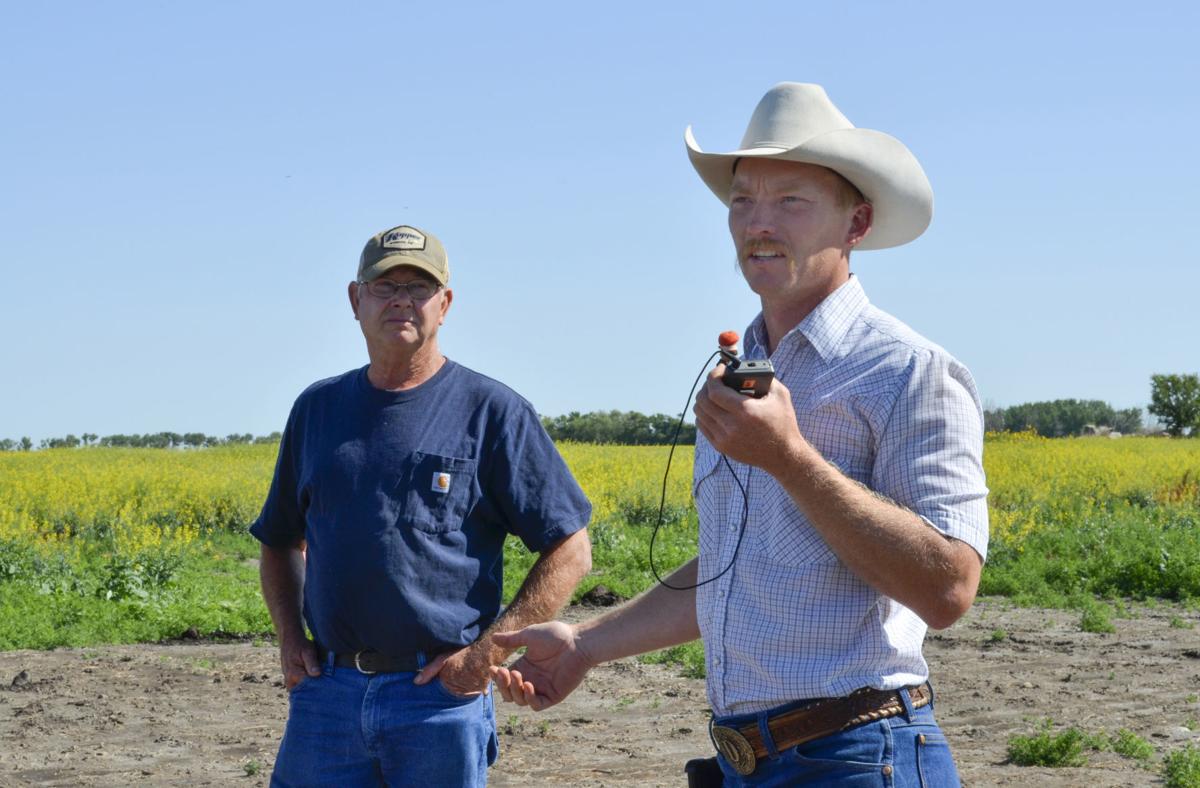 Matt Peterson, right, farms this Bottineau County field where a pipeline leaked in 2011, contaminating the soil with brine. Standing beside local landowner Larry Peterson in July, he said he grew canola with better success this year in the salty soil than when he tried wheat in the past.

RENVILLE — Wheat, corn and bright yellow canola sprawl out across the flat prairie this time of year in Bottineau County, broken up every so often by a patch of barren land.

Wildcatters first hit oil here in the 1950s, bringing jobs to the region but also scarring the farmland by dumping brine into evaporation pits dug into fields. Oil drilling still occurs today, and although the state has since outlawed the pits, pipelines leak saltwater on occasion.

On a recent bus tour of the area, local farmer Daryl Peterson grabbed the microphone to talk about brine, which is salty water that comes to the earth’s surface alongside oil and gas at well sites.

“You can look off any direction and see a lot of damage,” he said.

He asked the driver to slow down by a bald spot every mile or so, including at a small tract of land southeast of Renville that a farmer seeds each year.

“I have never seen it harvested once,” Peterson said. “It will not grow a crop.”

A little further down the road, he nodded to the distance.

“We call this the ‘Great White Salt Flats’ off to the right,” he said. “It runs for half a mile.”

Peterson, who’s had brine spills on his own farmland, offered commentary to a group of landowners, state officials and oil workers on a tour hosted by North Dakota State University Extension and the Northwest Landowners Association.

He said he’s for oil development, but it needs to be done responsibly because brine contamination is costly and takes land out of production.

“The best choice is to do better regulation, better maintenance and prevent the spills,” he said. “The onus right now is falling on the landowners.”

And it’s tough on those who lease land, such as Matt Peterson, who farms an area northwest of Renville where a saltwater pipeline owned by Petro Harvester leaked in 2011.

The company has since installed a tile drainage system that captures water in pipes underground. Sumps pump it — along with the salt it carries — back up, and trucks carry the fluid away for disposal. Local landowners estimate that the leak damaged 26 acres eight years ago, and 20 acres remain sterile today.

“The thing that I really have a problem with is the slowness of everything,” Matt Peterson said. “I know there’s lots of other spills out there too and old ones as well that probably won’t ever be taken care of.”

Brine is handled differently today in North Dakota than in decades past. For one, it’s now disposed of down injection wells for storage underground.

Companies are required to clean up leaks, and state inspectors check up on their progress, said Karl Rockeman, director of the division of water quality for the Department of Environmental Quality. The state monitors sites by looking at reports from the company, as well as sending inspectors out into the field.

“Our goal is to restore the land or the water back to its pre-spill conditions,” Rockeman said. “That’s not always possible. We will require the company to keep cleaning up the spill until we get to the point where further efforts are going to be more harmful than they are helpful.”

For example, excavating contaminated areas is a common remediation technique, but at a certain point it can damage soil structure, Rockeman said.

Cleaning up brine contamination from decades ago is a different matter.

A study published last year determined there were over 200 historic brine pits between Bottineau, Renville and Ward counties, many of which still show signs of contamination today. The north-central part of the state was a hot spot for early oil activity, though the pits were present in western North Dakota, too.

North Dakota outlawed the use of surface pits to evaporate saltwater at well sites over 35 years ago. Prior to that, the state required companies to remediate the sites when they were done operating them.

“At the time, it was just a matter of suck out the fluid that was in them and fill them back in with soil,” said Cody VanderBusch, reclamation specialist with the Oil and Gas Division.

In many places, those steps were insufficient, as farmers to this day struggle to grow crops in those areas. But it’s what the state required companies to do to release their bonds — money that companies had to put up as a guarantee of funding for site cleanup.

A handful of research projects aim to figure out the best way to reclaim areas contaminated by saltwater in North Dakota.

VanderBusch said the state contracted with the company Terracon, which identified a successful drainage tile technique and will soon test it on a 2-acre site in north-central North Dakota. If all goes well, the state will consider using such a system at more old brine pits, he said.

The bus tour in Bottineau County stopped at an NDSU Extension research site north of Glenburn. There, range and grassland ecologist Kevin Sedivec stood atop a brine pit so contaminated in one area that salt crystals are visible.

He has applied several amendments — gypsum, manure and hay — to the soil in various places with different levels of salt concentration. Amendments can help push salt deeper into the soil to allow plants to grow at the surface.

Sedivec then seeded the areas with canola, barley, alfalfa and alkali sacaton. Some of the crops grew in low-salt areas that received amendments. For example, they sprouted up well where soil was treated with hay. The soil there showed a 68% drop in electrical conductivity levels, an indicator of salt concentration.

“Your next step would be to amend the whole site,” Sedivec said.

Another study came from a team that included Miranda Meehan, a livestock environmental stewardship specialist with NDSU Extension. Researchers tested grass and crop species in various levels of salt concentration to see what would grow best.

Several grasses performed well, even in highly salty environments. So did barley, but only up to a certain level of salt.

“It does give us some direction when we look at what could possibly grow on these sites instead of throwing something out there and trying it,” Meehan said.

In one other recent greenhouse-based project, researchers found success by placing highly absorbent materials such as straw atop soil to draw up water and dissolved salts.

“We do things often times in a controlled environment to see if it’s a proof of concept,” NDSU soil scientist professor Tom DeSutter told the group gathered at Sedivec’s test site. “If the concept works, now we need help from the industry and engineers to scale this. We’re not saying it will work on 20 acres, but maybe it will work on something like this.”

Before the bus tour, DeSutter said, he had spent little time observing brine contamination in the north-central part of the state.

“It’s worse than I thought it was,” he said.

Realizations like that are what Troy Coons, chairman of the Northwest Landowners Association, said he hoped participants took away from the tour.

“It’s one thing to read about it, to see a picture, but to stand on the land and see the scars, we hope that will make the impact that it makes on us, that we need to do better,” he said.

Rockeman, who attended the tour, said he was struck by a comment made by Matt Peterson, the farmer who leases the land at the site of the 2011 pipeline leak.

Peterson told the group that he’s caught flak when speaking about his concerns, given that he doesn’t own the land where the spill happened.

“I take care of it just the same as own,” he said. “Having people say it’s not mine doesn’t feel right.”

Rockeman said he plans to bring Peterson’s comments up with his staff at Environmental Quality.

“That’s a good reminder for us,” he said. “Those renters have a strong attachment to those sites too.”

Regulators talk abandoned oil wells ahead of hearings next week

Statewide, 639 oil wells are considered abandoned. Several hearings will take place next week on proposed rules aimed at preventing the problem from worsening.

A saltwater spill in Renville County could have contaminated as much as 400,000 square feet of soil.

A group of North Dakota State University Extension specialists, landowners, oil workers and state officials gather at the site of an old brine pit near Glenburn in late July.

NDSU Extension range and grassland ecologist Kevin Sedivec has treated the salt-heavy soil at a research site near Glenburn with amendments like gypsum, hay and manure to see what materials will help crops grow. He recently led a tour of the land, where oil producers decades ago dumped brine into a pit, contaminating the soil.

Matt Peterson, right, farms this Bottineau County field where a pipeline leaked in 2011, contaminating the soil with brine. Standing beside local landowner Larry Peterson in July, he said he grew canola with better success this year in the salty soil than when he tried wheat in the past.